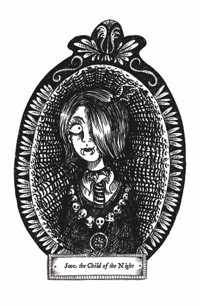 Everyone calls her Sooz. She's thirteen years old and lives in a council house with her Mum. Doesn't see Dad much - he's not really around. Sooz is a serious Goth. Really serious! She's also a pretty good swimmer and good at English and history, but not so good at maths and geography (but only because she doesn't like them). She's really into her Goth music, especially a band called AngelBile. And she's always getting into trouble, especially since she met Dirk.

Sooz likes to dress as a vampire. She really likes Dirk, even though he can be a bit annoying at times. But then again, most boys are. She and Christopher are Dirk's close friends. His only true friends. In fact, the only friends he's ever had! 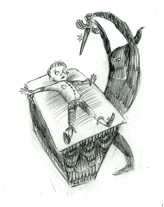 Christopher is a pretty normal kid really - or rather, he used to be until Dirk came along. When Dirk turned up, Chris wasn't to happy about it - after all, who wants a mad kid as their foster brother? Dirk made Christopher laugh. Really laugh and that soon won the genial Christopher over, even if Dirk did want to sacrifice him to the Dark Gods of Evil. But Dirk was 'crazy weird' but in a good way, a fun way, pretending to be a Dark Lord from another world and all the rest. Chris also liked the way Dirk always found a way around the parents and the teachers and the rest of the bossy adults. Or 'them' as Chris and Dirk used to call them. Until Chris realized that Dirk really was a Dark Lord from another world... 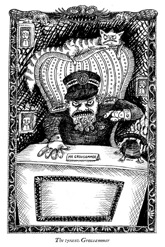 Grousammer. Headmaster of Whiteshields School. And an evil tyrant... well, that's what Dirk thought of him anyway. And he wasn't too far off the mark! Think of an 'old skool' headmaster from a 1950s English Grammar School, and you'll get the idea. A headmaster who liked nothing more than to use the slipper and the cane, every chance he got. If only they'd tear up all that politically correct 'you can't beat children' nonsense!

A harsh disciplinarian, but he isn't everything he is cracked up to be, oh no. He has secrets.... 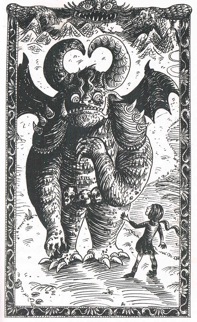 Gargon was Dirk's Lieutenant of the Tower of Despair, a seven foot tall winged and fanged demon with smokey breath and scaly skin. Really scary looking! Except that it turns out he's scary looking, but not at all scary inside. The Dark Lord made him do a lot of mean things, but he really didn't like doing them. Inside, he was quite a gentle monster, who liked to... well, hang out with friends and chat about nothing. To kick back and chill. Which he managed to do a bit of when he met Sooz. They became good friends in the end! 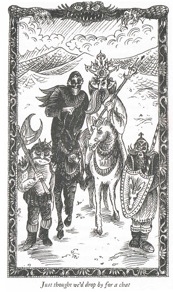 Hasdruban. White Wizard and implacable foe of the Dark Lord. He cursed the Dark Lord into the body of a boy, and banished him to earth. But even that is not enough for Hasdruban, the fanatic! Still he tries to hunt Dirk down - to kill him once and for all and for ever! Much easier to do now that he's lost all his powers and is stuck in the body of a puny human boy child.